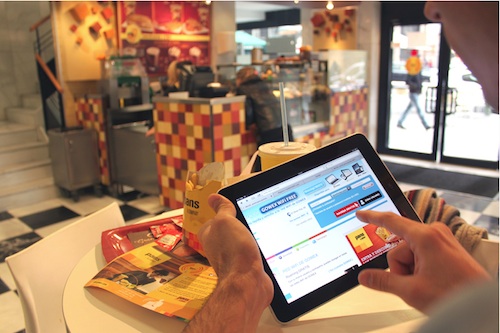 GOWEX wants to turn New York into a Wireless Smart City (WSC). The plan is to have free wireless Internet available everywhere and today the company announced the beginning of its push to create “Global Wi-Fi cities for global citizens” by offering free Wi-Fi to nearly 20 million New Yorkers, not to mention more than 50 million tourists.

GOWEX offers free Internet access in hundreds of hotspots between Manhatten, Queens, Staten Island, Brooklyn, and the Bronx thanks to a deployment of 1.953 Wi-Fi smart zones around the biggest neighborhoods in the city.

The launch of New York is just another step in the strategy GOWEX that, in the near future, will be implemented in the U.S. over three cities this year,”said Jenaro Garcia, CEO of GOWEX. “We are talking with various private and public entities that have a high interest in using and expand this project of WSC.”

The company has recently updated their free GOWEX WiFI app to include New York City. Users can download the app and see a map that includes the various free Wi-Fi hotspots the company has to offer.

GOWEX boasts free download speeds of up to 1Mb and points out that their network frees up other 3G networks that have been bogged down by so many users in the New York City area.

Google offers free Wi-Fi in Chelsea and GOWEX promises to deliver the same quality of Internet service to all neighborhoods in New York City, “which will make the city into a paradigm of free wireless connectivity around the world.”