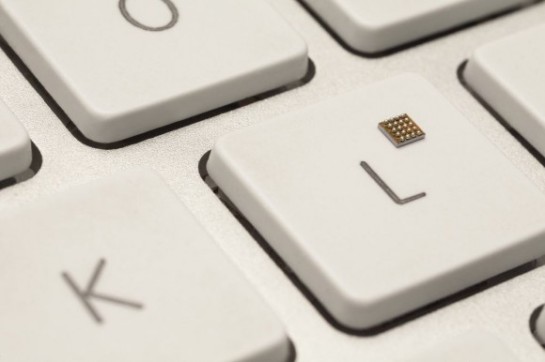 Chip manufacturers continue to reduce the size of processors with each new generation. And in doing so, the applications for their use continue to expand. This week, Freescale Semiconductor has introduced the world’s smallest ARM-powered microcontroller (MCU) in a bid to continue that expansion. It’s so small, it can be used in devices designed to be swallowed and is currently 25 percent smaller than any other ARM MCU on the market.

The Kinetis KL02 is a tiny MCU as can be seen from the image of it laying on a keyboard key above. It measures just 1.9 x 2.0mm, and yet it includes a 32-bit ARM Cortex-M0+ core running at 48MHz, has 32KB of flash memory on board, and 4KB of RAM. It’s also happy operating in temperatures ranging from -40 to 85 degrees Celsius.

Freescale developed the Kinetis KL02 in order to support the Internet of Things – the growing number of small and low-powered devices that are connected to the Internet. By developing an ARM chip this small, Freescale hopes manufacturers can design their devices around it and make them much smaller, too. Expected uses include portable consumer devices, remote sensors, devices we wear (e.g. integrated into clothing), and integration with medical products which are small enough to be swallowed or implanted.

The Kinetis KL02 is expected to be available from July with each MCU costing around $0.75 if bought in 100,000+ quantities. Freescale will also be supporting the KL02 with its Freedom development platform available from next month in preparation for the July launch.

Yesterday, Google revealed the rumored Chromebook Pixel to the world. Though the pseudo-netbook comes with the very hefty price tag of $1300, and you might not feel that what it packs under the hood is worth the price of a Surface Pro and iPad Mini combined, the device at least has something of a sense of humor. Like all good pieces of technology, it responds to the venerable Konami Code.

If you enter the code into the Pixel, up-up-down-down-left-right-left-right, then B followed by A, you’ll activate a little light show displayed on the Pixel’s LED strip, which is located on the cover. You won’t unlock more functionality that you might find justifies the $1300 price, but hey, it’s always great to see the Konami Code chugging along into 2013, appearing in mediums that don’t have anything to do with Konami, cheat codes, or even video games.

Wired captured the light show in GIF form, in which the Pixel’s LED strip jumps between various colors of light. We haven’t gotten our hands on a Pixel to try out the code just yet, but Wired reports that the code is simply entered using the keyboard’s directional keys. The report doesn’t say if the code takes priority, or if you can only enter it in specific apps.

If you look closely at the light show, it seems to actually play the Konami Code back at you. Clever stuff.

The two things everyone is mainly focusing on with regards to the Chromebook Pixel is the exorbitant price and that it hides a Konami Code easter egg. If that doesn’t sum up the public’s reaction to Google’s fancy new Chromebook, we don’t know what else does.

Jeff Nelson, who began working for Google back in 2006, has shared a very interesting bit of history about a project that he worked on in his early days with the company: Google OS. His work eventually evolved into Chrome OS and spawned the Chromebook , but at the time Nelson’s web-based operating system was built around Firefox.

Google hadn’t yet started working on Chrome — the first public release didn’t happen for nearly two more years. But Nelson was already spending the bulk of his day working on web apps inside a browser, and he was looking for a way to claw back some of the development time he lost every day by traditional operating system inefficiencies.

Nelson spent a lot of time closing and opening his browsers and clearing cache files. He found himself throwing precious minutes away waiting for those operations to complete, and figured there had to be a better option. Nelson began hacking away at Google OS.

Its beginnings sound a lot like Webconverger or xPud — with little more than Firefox sitting atop a stripped-down Linux base. Nelson’s goal wasn’t to build a web-first OS at the time. He wanted something super-fast to do his development on, and he started out by loading the entire OS into RAM. That immediately took care of most of his file system bottleneck issues.

Relying on RAM for storage means you don’t have a lot of room for software bloat, and Nelson had to rely on web apps and keep local installs to a minimum. His work was continually autosaved to networked and local storage to prevent data loss, and for years Nelson worked on Google OS running entirely in RAM.

Initial reactions to Nelson’s OS were tepid at best, but as it became increasingly clear that web apps really could provide a complete computing experience, Google started pursuing the idea of a browser-based operating system. In 2009, Chrome OS was finally announced and then released on the Cr-48 the following year.

In its present form, Chrome OS doesn’t quite deliver the kind of speediness Nelson would have enjoyed in his RAM disk setup. Maybe the next generation of Chromebooks will offer a bit more giddyup.

Update: Several current Google employees have come forward to question Nelson’s claims. At this point it seems more likely that his work was a 20% project that happened to utilize a lightweight OS that ran a browser, and not the inspiration for Chrome OS itself.

It’s easy to track the development of e-paper simply by looking at the different generations of Amazon’s Kindle e-reader. The displays have got progressively better to the point where they even ship with the option of a backlight.

However, one area that still needs a lot of development is color. Producing color e-paper continues to be a problem, and we’ve yet to see a commercially viable solution that has been selected for use in a popular e-reading device. When a new Kindle ships with color e-paper, we know it’s viable.

Ricoh hopes to change that with the development of a new color e-paper display that has a unique new structure. The display is transparent, but uses an electrochromic material that can change color from cyan, to magenta, to yellow.

Electrochromism allows certain materials to change color when an electric charge is applied to them. This is a great solution for color e-paper as the charge is only required to change the color, not maintain it, meaning power use is very low. Ricoh also kept the thickness and complexity of the display to a minimum by making the required electrodes active TFTs, meaning you only need one electrode driver for the display, rather than one for each color layer used.

The prototype color e-paper Ricoh has on been showing off is 3.5-inches, 113.6ppi, and achieves 35 percent color reproduction. Importantly, that’s already higher than what is achieved for color in newspapers, plus Ricoh’s display has more than twice as bright as other color e-paper displays.

Ricoh is set to continue developing its display technology and wants to increase the size of the color e-paper to 6 and then 10 inches. The company also believes it can reduce screen refresh time down to 100ms, where as it currently takes over a second on the prototype. 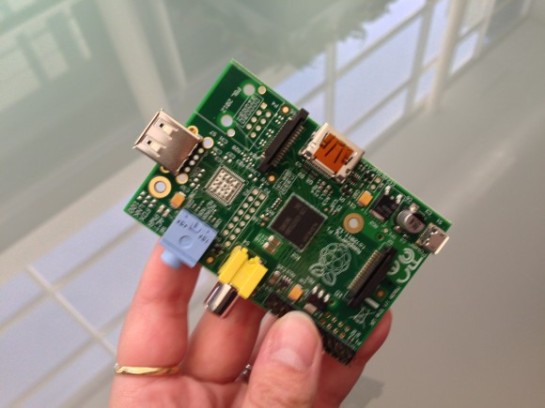 The Model A is cheaper, and though the $35 Model B is more versatile, the Raspberry Pi Foundation still views the Model A as an extremely useful product, mainly due to the significantly lower power consumption compared to the B. The Foundation says that they’ve seen a demand for the less robust, less expensive Model A from people making industrial control modules, roboticists, and even people wanting to create the cheapest media center possible.

The reason why the team hasn’t produced the less powerful Model A yet is simply because the Model B has been in much higher demand, and the two models use the same parts. The Foundation made the choice to continue with the Model B and meet the higher demand, and it’s hoping to get the $25 units out into the wild early into the new year.

Production of the unit is taking place at a Sony plant in Wales, and the Foundation expects all production of the Model A units — regardless of distributor — to be produced there for the foreseeable future. If you’ve been waiting to get your hands on the unit, head on over to Farnell or RS Components, and remember to be patient, because everyone seems to want a Pi.