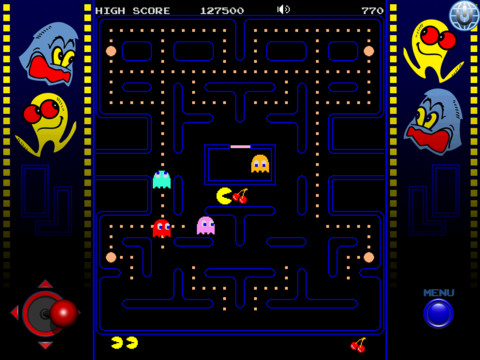 Here at PadGadget, we love classic arcade games and retro-inspired apps. Maybe it’s because we are all a bunch of old fogies. Maybe it’s because we long for the simpler times, when games only had one view and four buttons. What ever the reason, we love all manner of pixilated play. To honor our childhood memories, we are spotlighting some of our favorite old school games and apps.

In our first installment of Flashback Friday, we thought we’d start with arguably the most popular video game ever made. PAC-MAN chomped his way in to the hearts of young arcade game patrons in October of 1980. The fruit-eating phenomenon was the first to pique boys and girls interest in the same game. When Ms. PAC-MAN made its way into pop culture, the War of the Sexes was on.

PAC-MAN for iPad launched in the App Store only a few months after Apple’s tablet hit store shelves. It, of course, was an instant hit. The game stays true to the NAMCO original with just a few tweaks for iOS. You can play the game with traditional joystick controls using the virtual joystick, or swipe the screen in the direction you want to go using Swipe Mode. You’ll be gobbling strawberries and chasing down Pinky, Inky, and Clyde just like you did as a kid, only you don’t have to ask your mom for a fist full of quarters before you leave the house.

The best part is that PAC-MAN for iPad is compatible with the iCade, so you can play your iPad with a real, physical joystick.

PAC-MAN for iPad is available in the App Store for $4.99. If you feel funny about paying such a heafty price for a 33-year-old game, you can always check out PAC-MAN Lite for free. You can play the first stage of the game until your fingers fall off in the lite version. I have a feeling you’ll be dropping the five bucks on the full version minutes after you start playing.

There is nothing sweeter than being able to go back to your childhood for a few wondrous moments. Not the bad part of childhood, where you dad takes away your skateboard for a week because you were out past sundown. The good part, the times when you spend long, lazy summer days playing video games on your Atari. Well, you can relive those sweet bygone days again with Boulder Dash-XL.

Not only do you get a port of the original, but you’ll also get an updated version that is mastered perfectly for the iPad. You won’t be disappointed in either rendition. They are both pleasing to all generations of gamers.

Players control the iconic Rockford as he digs his way through mazes and tunnels, looking for gems and trying to find a way out. Using a virtual D-pad, move Rockford up, down, left or right. He will clear away snow, bushes, and dirt mounds as he searches for all of the gems.

Be careful where you dig. There are boulders in various locations that may roll to a hole and squash you. If you dig too slow and find yourself looking up at a big rolling ball, there is little chance you will survive.

Players also have to watch out for fireflies. Those little pests will reduce Rockford’s damage if he runs into them. It is pretty easy to get rid of them, though. Players just have to push a boulder onto their buzzing heads. 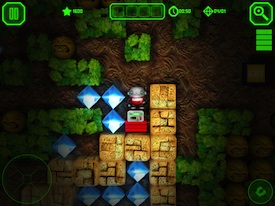 In addition to retro mode, players can try their skills at the iOS version in Arcade mode. The characters look different, the dirt and gems are more defined, but the game plays exactly the same as it does in retro mode.

Players can also play the iOS remodel in Score Attack more or Zen mode. In Score Attack, players have a specific amount of time to collect as many gems as possible and make it to the exit. In Zen mode, players can practice their technique on previously unlocked levels without having to worry about time. 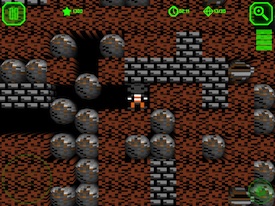 Fans of the original 1984 game will love every bit of this game. If you are too young to remember the pixilated madness, you’ll appreciate the new version. Most people will love them both.

What I liked: I love that both the retro and new versions of the game play exactly the same. You won’t be disappointed with either.

To buy or not to buy: Buy, Buy, Buy! If you like classic arcade gaming, this is tops!