Grumble and Piccolo’s Fishing Trip is a fun ocean themed match three game from Thumbstar Games. In this title, which is aimed at kids, players will make fishy matches to progress through the game.

This match three stars two Chinstrap penguins, Grumble and Piccolo, who captain a small boat and sail around exploring the world’s fishing grounds. Each day, they have to catch enough fish to satisfy all of their strange customers, with each day getting harder and harder.

When you open the app and start the first level, the game will begin with a tutorial. You must catch a certain number of each type of fish per day in order to progress through the levels.

There are a wide variety of oceanic creatures, from shrimp and crabs to several types of fish. Every level has a time limit and you have to finish before the timer runs down.

The controls are standard. You slide on a fish to switch its position with another, making matches to clear the board.

Every match that you make earns money, which is basically the equivalent to score. Your money does not carry over from level to level.

The game has some perils that must be avoided. For example, if two bombs match up, they will explode.

There are power ups that you can earn when you match more than three creatures. Placing these power ups, or gadgets, in the lobster traps at the top of the screen will cause them to become activated. Power ups will destroy rows of creatures, giving you bonus points.

Gameplay is pretty standard for a match three game, but if you like this genre, you will like this game for its bright graphics and its cute characters. It’s worth downloading just for the price – you can’t beat free, after all. 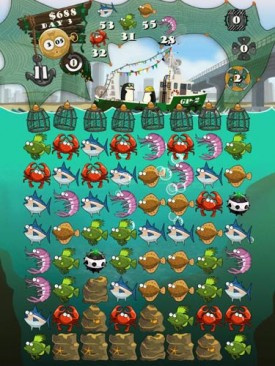 What I liked: This game offers fun match three gameplay, a humorous storyline, and quirky characters.

What I didn’t like: Match three games are common in the App Store, and this is a game that you have both seen and played before in other forms. This game has no Game Center achievements or leaderboards, which was disappointing.

To buy or not to buy: If you like match three gameplay you should take the time to download this fun little game.